Edit
watch 01:36
We're Getting Mutants in the MCU - The Loop
Do you like this video?
Play Sound

Herbert "Magic" Williams is a character who appears in the Season 3 episode titled "The Leap Home, Part II (Vietnam)". The part of Herbert is played in the episode by Christopher Kirby. who heads the Quantum Leap time project. Actor Ernie Hudson is slated to play the part of an older Herbert, who's now part of Quantum Leap project, in the Quantum Leap series revival on NBC-TV for the 2022-23 television, with the storyline taking place in 2029, thirty years after the finale of the original Quantum Leap TV series, and the premise of the first episode revolves around the central character and head of the revived Quantum Leap project, Dr. Ben Seong (Raymond Lee) getting stuck in the late 1980s with a case of amnesia. 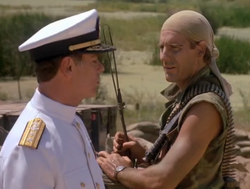 Sam leaps into Herbert, or "Magic", a member of Tom Beckett's Navy Seal platoon in Vietnam. Al soon tells Sam that he is there to make sure the mission is successful, which Sam interprets to mean that he is there to once again try and save Tom's life. Magic became Herbert's nickname after he miraculously escapes death twice, which includes the time when he was getting off of a chopper as the unit was facing heavy enemy fire, and the fact that the unit, which had been taking heavy hits before his arrival, hasn't had a single casualty since!

As Herbert, Sam quickly adapts to life in his brother's unit and starts using Al and Maggie Dawson, a reporter, to figure out what he is supposed to do. Sam talks Tom into bringing her in on their next mission, which is the one where Tom had died in the original order of things.

After some maneuvering by Al and Ziggy to get the unit to avoid an ambush put together by a VietCong Spy, Tom's life is saved, but Maggie dies instead.