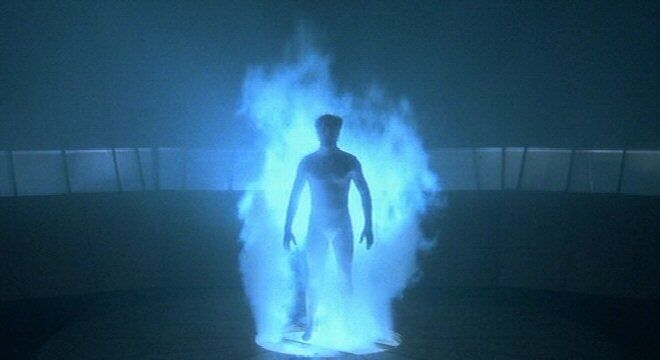 Add pages, and edit existing ones connected to the series.

Both are used to set right what once went wrong in others' lives as well their own...

Sam steps into the Quantum Leap Accelerator and Vanishes.

Quantum Leap is an American television series that was broadcast on NBC from March 26, 1989 to May 5, 1993, for a total of five seasons. The series was created by Donald Bellisario, and starred Scott Bakula as Dr. Samuel "Sam" Beckett (Scott Bakula), a quantum physicist from the near future who becomes lost in time following a time travel experiment, temporarily taking the places of other people to "put right what once went wrong". Dean Stockwell co-starred as Admiral Al Calavicci (Dean Stockwell), Sam's womanizing, cigar-smoking sidekick and best friend, and high-ranking career Navy officer, who appeared as a hologram that only Sam, animals, young children, and the intellectually disabled could see and hear. The series featured a mix of comedy, drama and melodrama, social commentary, nostalgia, and science fiction, which won it a broad range of fans. In 2004 and 2007, Quantum Leap was ranked #15 and #19 on TV Guide's "Top Cult Shows Ever"; It won five Emmy Awards during its run on NBC, and the co-stars, Dean Stockwell and Scott Bakula both won Golden Globe Awards for their performances on the series.

Go to these sites for info or for help with your own wiki!