Runaway was the 11th episode of Season Three of Quantum Leap, also the 42nd overall series episode. Written by Paul Brown, the episode, which was directed by Michael Katleman, originally aired on NBC-TV on January 4, 1991.

Sam, as 13-year old Butchie Rickett, must put up with a bratty older sister and keep the family together while saving his mother Emma, who disappears after an argument with dad Hank while on a trip to the Wyoming mountains.

July 4, 1964: In this episode, Sam leaps into a thirteen-year-old boy named Butchie Rickett (Frank Borin), who is on an across-country trip from their home state Florida to the Wyoming mountains, with his controlling father Hank (Sherman Howard), desperate mother Emma (Sandy Faison), and bullying older sister Alexandra (Ami Foster). He is told that the mother is going to disappear and he and Al assumes that she will run off with a one Billy McCann (Joseph Hacker), a man that she and Hank both knew in high school that she winds up reuniting with on the trip. A widower himself, Billy is accompanied by his 14-year-old daughter Beth McCann (Amber Susa), who seems to take a liking to Butchie, as she asks him wryly, '"What grade are you in?".

If Emma, who seems to be quite friendly, if not smitten with old classmate Billy, runs of with him, as feared by the family, it would ultimately destroy the family, as it had did in the original timeline of events before Sam's leap into Butchie, and cause Butchie to not graduate high school and his sister to get pregnant at sixteen.

Sam does his best to keep the pair, Billy and Emma, apart but they just keep running into each other and eventually, Hank becomes jealous and his controlling nature gets worse. Turns out that Hank had went off to college himself on a football scholarship but he got injured and dropped out of college. He's very proud of owning his own poultry factory and is intimidated by the old suitor's doctorate and more prestigious career. Sam is having difficulty getting anyone to listen to him because of his age and the sister just will not stop harassing him.

Eventually, after a fight, Emma escapes off to the forest to try to collect herself as Sam follows her. Sam, as leapee Butchie, then learns how desperately unsatisfied she is in life after having to give up on her dream of going to college and being a doctor when she got pregnant and he manages to convince her to go back to school. Her husband is against this plan, however, because he feels that it's his job to support the family and so she runs off again. Sam discovers that she did not run out on the family after all when Al comes across records of skeletal remains being found at the bottom of a nearby cliff thirty years later.

Sam leads Butchie's father Hank and sister (as well as the Billy and his young daughter) to the cliff that the mother has somehow gotten stuck on. In a desperate situation, the Billy asks the old suitor for help rescuing Emma, but he panics and takes his daughter to go find an authority figure to aid. The family tries to lower a rope down but the mother is frozen so Sam has to be lowered down to personally lift her back up to the top. Billy has a lot of difficulty with the rope and it almost completely snaps but ultimately Sam and the mother reach the top safely. Sam finds out that father eventually retires and the mother goes on to get her doctorate. Sam decides there's still one more thing to do before he leaps, and dangles Alexandra in a well to stop her from torturing Butchie in the future, earning her grudging respect. 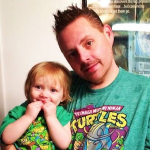