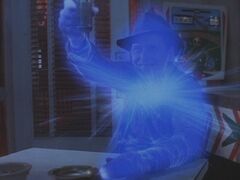 Stawpah was born in Ukraine in March 1913, before leaving for the US on the same boat as Gooshie. From twelve years-old, Stawpah worked a mine in Marianna with Gooshie, until Gooshie left for Cokeburg. As a miner, Stawpah was known for his ability, having a reputation for loading close to 24 tons of coal a day, much more than his counterparts. This heavy work, however, eventually began to take its toll, causing arthritis to develop which impaired his work. Shortly afterwards, a fire in the Marianna mine left Stawpah as the only survivor. The disaster left Marianna citizens act differently towards Stawpah, eventually forcing him to leave for Cokeburg. By this point, his arthritis and emotional state had degraded beyond his ability to mine. In 1953, Dr Sam Beckett meets Stawpah in Al's Place, a bar in Cokeburg. During this time, the Cokeburg mine collapses, trapping miners, Tonchi and Pete at the bottom. Assisted by Sam, Stawpah devises a plan to help the trapped miners - a plan which proves successful. Shortly after, during a party at Al's Place to celebrate the rescue, Stawpah leaps. The event, witnessed only by Dr Beckett, leaves no-one with any memory of Stawpah's existence.

Links to Other Characters[]

As with most characters in Mirror Image, Stawpah is based on someone from Sam's past, in this case, Al's late uncle Stawpah, who was also crippled with arthritis. It is possible that they are the same character although this was never confirmed onscreen.